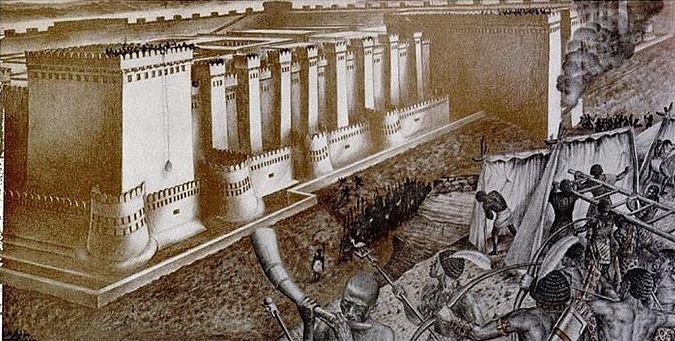 History, as told here by Dr. Chukwunyere Kamalu, has recorded the 12th Dynasty of the Middle Kingdom (circa 2000 – 1750 BCE) as, time of conflict between the people of Ancient Egypt and the Kushites of Nubia.

The following is a map showing where 12th Dynasty Egyptian fortresses are located on the Nile River.

“Evidence for the system of written communications used in Egypt’s administration of its forts is sparse. Of the papyri that exist, the “Semna Dispatches” has provided most of the information”. (Kraemer 2016)

Below, 12th Dynasty Semna Dispatches written on papyrus, on display at the British Museum.

Below, commentary on and a facsimile of the Smaller Semna Stela.

Pictured below is a Middle Kingdom-Second Intermediate Period limestone stela held by The Sudan National Museum in Khartoum, which shows an Egyptian desert patrolman watching over a bound and kneeling Nubian captive.

The following is the transliteration and translation of the the Semneh (Semna) stela that marked ancient Egypt’s southern boundary under 12th dynasty king Senusret (Sesostris) III.

**Kushite-Nubian Oppression Compared to the Book of Exodus**

Some Biblical scholars have identified the 12th Dynasty as the kings who ruled Egypt during the time of Abraham.

(tap/click on image to enlarge text)

“Yam” can also be translated as “the Nile”.

Likewise, in Qur’an’s account of the Exodus the Arabic word “albahra”, commonly translated as “sea”, also has the meaning of, “a great river”, or “the Nile”.

In the study of the phenomenon called “wind setdown”, a reconstructed model basin produced easterly winds, like those described in Exodus 14:21, which produced a land bridge.

Earlier researchers suggested wind setdown as a possible explanation for the Israelites crossing the sea, which they propose as the Red Sea rather than the Nile.

“This animation shows how a strong east wind over the Nile Delta could have pushed water back into ancient waterways after blowing for about nine hours, exposing mud flats and possibly providing an overland escape route similar to the biblical account of the Red Sea parting.” (Scheitlin T., & McVeigh, R. (n.d.))

Pictured below, a boat traveling the Nile near Aswan in modern times, with a wall of papyrus reed marsh on the right hand and left side.

“Papyrus reeds and other vegetation do not grow on the Rea Sea, and thus it seems that the crossing could not have been here but rather some unidentified body of water bordered with marshy flats and reeds.” (Nelson 2014, 599)

An alternative translation of Exodus 14:21-22 would read,

21 And Moses stretched out his hand over the Nile; and the Lord caused the Nile to go back by a strong east wind all that night, and made the Nile dry land, and the marsh was divided. 22 And the children of Israel went into the midst of the Nile upon the dry ground: and the marsh was a wall unto them on their right hand, and on their left.

Important points to know about the 12th Dynasty:

1) During the Egyptian Dynastic periods family descent was traced matrilineally, according to Dr. Toyin Falola.

Under old African matrilineal tradition, the king’s successor was his sister’s son. (Diop 1987, 48) A woman inherited the crown in instances where there was no male heir.

2) An aspect of matrilineal succession is a related emphasis on the maternally-related males as brothers or uncles. In matrilineal kingdoms this can manifest itself as co-regency.

From at least as early as the Middle Kingdom, kings ruled with their heirs as co-regents to protect against disruption and instability at the transfer of power.

** Moses in the Writings of Manetho & Josephus **

Below, a summary of the account of the Exodus by 3rd century BCE Egyptian priest and historian Manetho.

(Note: Some modern dermatologists and theologians believe that in ancient times leprosy may have been referring to vitiligo or other skin ailments.)

The Greek name “Amenophis” translates to the Egyptian name “Amen-hotep”.

Written in stone near the village of el-Hosh, on the west bank of the Nile, are, the name of 12th Dynasty king Usertesen (Senusert), and the names, “Amenhotep” and “Asarhotep”, the latter being a senior military officer.

**Senusret One and the Same as Ramses**
Scholars have identified Sesostris (Senusret) as, one and the same man as Ramses, son of Amenophis (Amenhotep).

Above Manetho says, Osarsiph (Moses) opened communication with the Hyksos to coordinate an attack on Ancient Egypt. Sudanese historian Dr. Mawut Guarak provides a similar account, however, he speaks of a joint Kushite and Hyksos military campaign against Ancient Egypt.

Below, an artistic rendition by Dr. E. Harper Johnson of Kushites (Nubians) preparing to bring an Egyptian fortress “to the ground”.

Kushite warriors lay siege to one of seventeen forts constructed by the great Egyptian kings of the Twelfth Dynasty to safeguard the southern frontier of the country from attack by dark-skinned neighbors to the South. Although these forts were considered impregnable, they were stormed and partly destroyed by brave “Kerma Kushites”.

According to other scholars, the Hyksos were also Kushites.

Below, Statues of Shepherd Kings (Hyksos) discovered in Tanis.

Citation for the photograph below,

In the Book of Amos 9:7, Israelites are likened to Kushites (Ethiopians).